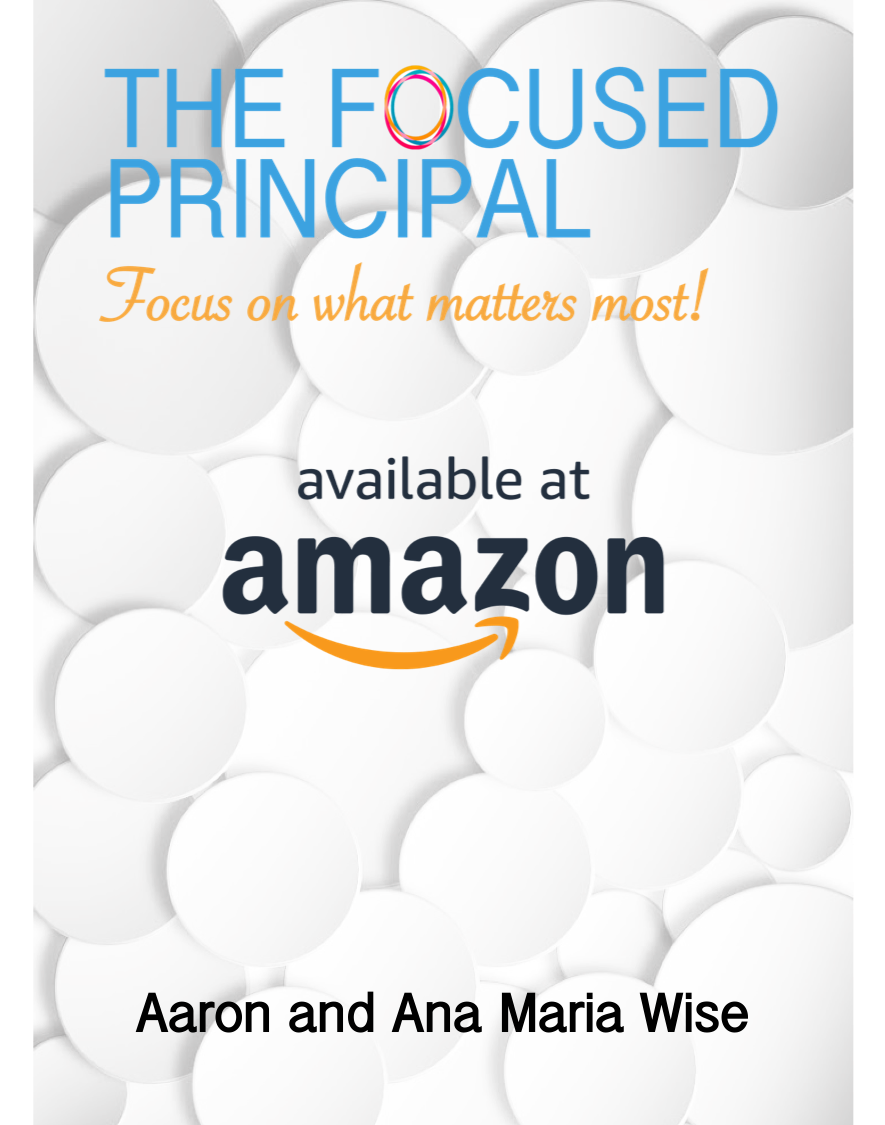 The Focused Principal Book is now available on Amazon!

For a sneak peak inside - Chapter 1 is available for free below:

Jim Collins has spent decades studying the CEOs of Fortune 500 companies in an attempt to understand better what differentiates a good leader from a great leader. He then presented his finding in his best-selling book Good to Great. In this book, which has become almost mandatory reading in the business world, Collins makes the following claim about what he found out about the most successful business leaders in the world:

“Level 5 leaders display a powerful mixture of personal humility and indomitable will. They're incredibly ambitious, but their ambition is first and foremost for the cause, for the organization and its purpose, not themselves”.[1]

As with CEOs of the world’s most successful companies, the leaders of schools must come from a position of having great personal humility and drive. No other trait is as essential for success as humility. Without humility, a principal cannot be successful in their role, and great humility will cover a multitude of other weaknesses so that even a relatively ill-equipped principal will be able to do his or her job well.

In his book Humilitas, Dr. John Dickson states that for any leader, “Humility is common sense.”[2]Dickson goes on to explain that no one person can have expertise in all areas of life, and so the humbler a person is, the more they can benefit from the knowledge, skills, and understandings of others. A lack of humility is the equivalent of closing your eyes while standing in front of a mirror. You will no more be able to see in a mirror with your eyes shut than you will be able to understand and develop solutions to problems without humility.

A humble principal understands that they should not try to be an expert on all matters in a school. A Grade 1 teacher in a school should be the expert on the needs of his or her Grade 1 class and hence be the best person to help the students in that class learn and grow. The AP Chemistry teacher should be not only an expert in the chemistry course content but also know what pedagogical tools will most effectively assist his or her particular students in achieving the most from the course content. The school nurse should be the one in the school who is the most adept at caring for an unwell student. The principal’s job is not one where they need to know how to do every role in the school better than anyone else. Instead, it is their job to know better than anyone else, how to help other people to undertake their roles well.

Dickson defines humility as “a willingness to hold power in service of others.”A principal must come from the standpoint that they are in their role primarily to help others. Obviously, the end goal of schooling is to develop the students. Students do not come to school each day to serve the principal; instead, the principal comes to school each day to ensure the conditions are in place that are necessary for the students to learn and grow. Similarly, the teachers at the school are employed to teach the students, and the principal does his or her best when he or she helps the teachers to achieve their goals. The teachers do not serve the principal as the principal’s whole role is centered around ensuring that they can do their job well. Even the school bus drivers and janitors help achieve the aims of the school best when they are supported by a principal who puts in place the conditions necessary for them to do their jobs to the best of their abilities.

A humble principal asks questions to understand a situation better rather than putting themselves into a position when they just tell others what to do. A humble principal puts in place strategies and resources to help a struggling teacher to improve rather than merely pointing out their faults and demanding improvement. A humble principal takes time to encourage all staff and appreciate the work that they have been doing rather than expect others to go around praising them. Through being humble, a principal improves the capability and motivation of those around him or her, rather than limiting others to their controlling idea of what should happen.

John P. Kotter of the Harvard Business School identifies that ﻿ “Arrogant managers can over evaluate their current performance and competitive position, listen poorly, and learn slowly.”[3]There is a lot of danger for a principal who is not prepared to be humble, and there is even more danger of the school that they are leading. A proud principal may think that they are successful when, in reality, they have created a culture where people are too afraid to tell them things that are going wrong. A principal who thinks that they know what is best, limits the solutions to problems to what they currently understand, rather than taking advantage of the combined understanding of all those around them. Similarly, a principal who is not prepared to serve others, limits what others can do in service to the school.

In all of this, humility is not only a morally noble character trait, but it is also something that makes the principal more effective in their role. A principal only limits themselves though having a prideful nature that prevents them from accepting all that they can receive through the service of others.

With all this being said, there can be some confusion in principals regarding what humility is, and more importantly, what it is not. Humility does not mean that you are a doormat that people walk all over; neither does it mean that you are responsible for going around the school and doing other peoples’ work for them. A humble principal is not a “sucker” who everyone takes advantage of, and neither should they be someone who is continuously changing decisions based on the latest complaint. A humble principal is a strong leader who has an unwavering purpose in all that they do.

Scenario 1A teacher comes to you and states that they want the school to change the mathematics program. Even though this teacher has only been at your school for three weeks, they are adamant that they can already see that the program that their former school used is far superior to the one at their new school. Currently, your students achieve results in standardized mathematics tests that are significantly above the norm for similar schools in your area. Furthermore, the mathematics department is comprised of a group of passionate teachers who have each been at the school for several years and who have spent a lot of time developing the current mathematics program.


Take a moment to think about how you could respond humbly in this situation. While there is no one right answer, there are responses that are definitely humbler than others.

One possible response could include the following:

Again, the above are just some aspects of what could form an appropriately humble response to this scenario. There are a lot of other humble responses that may be even more effective than the ones identified above. Still, the above points should give you an understanding of the types of reactions that come from a humble but strong leadership style.


Scenario 2You support a teacher’s idea to modify part of the school’s reading program in an attempt to improve literacy levels at the school. Despite research showing that the new program should work, it does not, and standardized testing results drop. The parents of the school show great concern about the new program and would like to know if the school plans to continue to run a program that appears to be failing the students significantly.

Some suitable responses could be:

Ideas for Right NowAt the end of each chapter in this part of the book, there will be some ideas that you can put into place right now to help you improve what you are doing. We will not go into great detail regarding these ideas, but rather, we aim to provide direction to you for further research if you believe an approach could be beneficial for you personally. Below are just some things to consider if you would like to benefit from being humbler in your role as the school’s principal:

360 Degree Feedback– This is a great tool to help you understand how you can improve from multiple perspectives. The tool involves receiving feedback on your performance not just form your superiors, but also from a wide range of people you work alongside and those who benefit, or otherwise, from the decisions you make. When done well, the feedback gives a humble principal a sound understanding of what they can focus on improving from multiple perspectives.
School Improvement Survey– Every school should do a yearly school improvement survey to understand better the opinions of a wide range of parents, staff (not just teachers but all staff) and students. There is an art and a science to putting surveys together, and it is recommended that schools either use an outside company to conduct the survey or use reliable survey questions to collect data. Survey results should be shared with the school community along with a response from the school regarding any areas of significant celebration or concern.
Give Credit to Others– Giving others credit for the benefit they bring to the school is a meaningful way to demonstrate humility. It is worth reviewing both the channels you use to give credit to others and the frequency that you use them.